The passage of time is as inherent to the art of photography as the camera itself–whether to resist its fleeting nature or to canonize its ephemerality. Funch’s oeuvre has a penchant for deconstructing, distorting, and re-imagining time through photographic techniques. In an age that once again give its accolades to the analogue, Funch has largely remained faithful to the digital form. Yet his motivations lie not in the desire to enhance or embellish as much as they seek to create imaginary narratives that touch upon temporality and our inability to control it.

A first glance, his newest series “Imperfect Atlas” seems to evade this penchant— in Hudson River School-esque landscapes majestic mountains loom imposingly over greenery, evoking a 19th century painting in photographic form, championing the graces of Manifest Destiny. A second glance, or a longer look, reveals something awry: the colors are too vibrant in certain areas, nearly psychedelic, the edges of the ecological landmarks blur or waver, a static tree appears in motion. The photographs are captured using the most primitive process of color photography: a triple exposure in three distinct colored filters to produce an accurate, yet imprecise, color rendering.

The choice is not arbitrary. The technique dates back to the mid 19th century–the moment of the Industrial Revolution and its rapidly changing technology. Imperfect Atlas is a series captured during Funch’s multiple trips to the Northern Cascade Mountain Range during the period of 2014-2016, mostly contemporary recreations of vintage Mt. Baker postcards he discovered during his research. Using these ephemera, maps, and satellite images, Funch was able to locate positions where the original postcard images were made, re-capturing the mountain’s glaciers from the same positions to create comparative juxtapositions of ‘then and now.’ However the current glacial recession predates the use of color photography: the recession dates to 1850, while tricolor projection became the standard in the following decade. With this timeline in mind, a catch 22 emerges: Man’s photographic representation of glaciers has always included a state of decline – only after glacial recession could we capture their presence as color image. The result are pittoresque renderings, filled with historicity and an implicit understanding that much of this same history has caused the gradual disappearance of what the image seems to capture.

Funch is a photographer who manipulates more than the aesthetic–he is an artist who frequently rearranges the components and workings of photography–time, space, light– as we widely accept them to be. He constructs narratives from re-constructing his images, rather than using his images to tell a precise story. He does not purport to tell the truth, but seems hesitant to convince us of any specific fiction either. His roots as a photojournalist are apparent; his body of work, however, is more nuanced–Funch meddles not to clarify or suggest, but to make us question our perception of truth and reality, laced with ambiguity. The decisive moment is  no longer decisive, nor is it only one moment.

This stance in apparent in his earlier and acclaimed series Babel Tales Funch elevated the voyeuristic to the poetic. In the claustrophobic setting of the metropole, Funch created street scenes that initially appear banal, yet a closer examination reveals a calculated fiction: in one photograph, the oncoming foot traffic of commuters are all captured mid-yawn; in another, passer-by’s each struggle to capture a photograph; in the the next an informal parade emerges of adults all wielding a colorful bunch of balloons. Funch has taken various individuals captured on the street and transposed them into a single image, a fictional document and moment in time. Here, Funch infuses The Imperfect Atlas with an aspect of this documenting/storytelling dichotomy, experimenting with re-photography and pairing the images with found ephemera.

In addition to sourcing postcards as inspiration for his renderings, Funch also created diptychs using memorabilia, photographs, and articles uncovered through extensive research, sifting through the libraries of academic institutions and even auctions on Ebay. In one diptych, two photographs appear side by side, showing two young women. The first, labeled August 13, 194, shows a girl mourning the disappearance of her brother in the Russell Glacier of Mount Rainer, her body hunched over in despair. A second, marked November 23, 1951, shows model Constance Brigham, a New York model, happily posing for the camera. The two women, their grief and happiness polar opposites on a spectrum of emotions, are linked by the same last name, causing us to wonder if they are possibly siblings.

In another image, a series of small houses appear in the valley of the mountain, the neat rows of identical lodgings in stark contrast to the majestic peaks that dwarf them. The tiny community is in fact a failed resort town called the Sunrise Historic District erected shortly before the Great Depression, a destination for adventurous travelers to experience nature—in an adapted state. When the stock market crashed, the venture was promptly abandoned. The 200 cabins were removed through the late 1930s and 40s, sold to Eastern Washington farmers for migrant labor housing, or used as housing around Puget Sound. While the main lodge remains in its incomplete state, the cabins have disappeared, the postcard, nearly propaganda, bearing witness to a failed vision, both utopian and commercial, wild and artificial.

Imperfect Atlas creates a sense of imagined nostalgia on two levels: while the contemporary photographs are nearly identical to those on the found postcards, the touristic snapshots themselves are fabricated snapshots rather than a clear window into the past; while the assorted memorabilia that accompanies the landscape images creates parallel narratives for both the photographer and viewer. Funch forges connections and stories that may or may not be true. It is blatantly subjective, at moments, entirely fabricated—and due to this the picturesque landscapes gain a sense of intimacy. It is an archive, but an imperfect one at that, at times purposely distorted, at others tangentially constructed–occupying the space between the desire to remember and the illusory nature of memory itself. 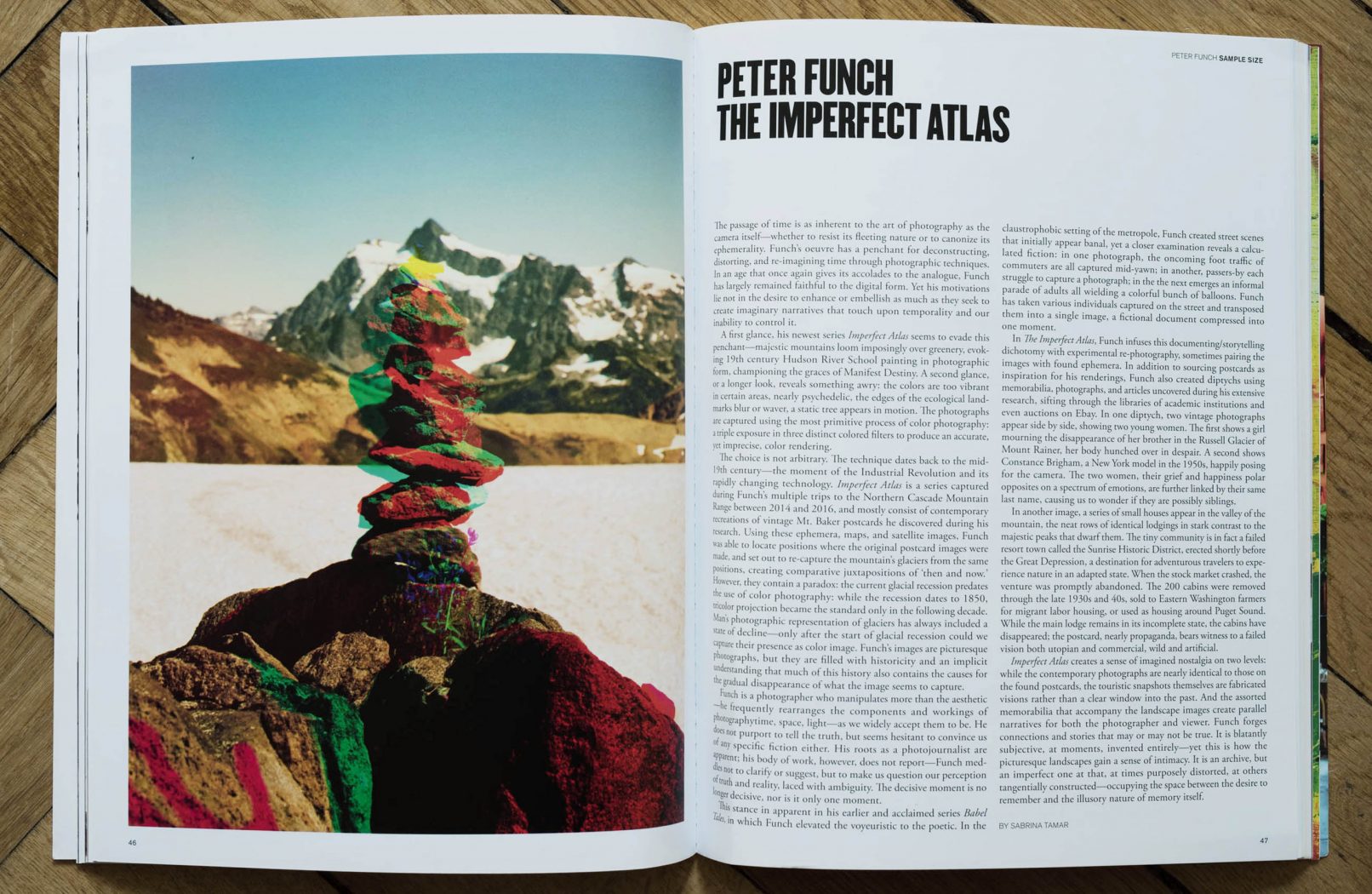 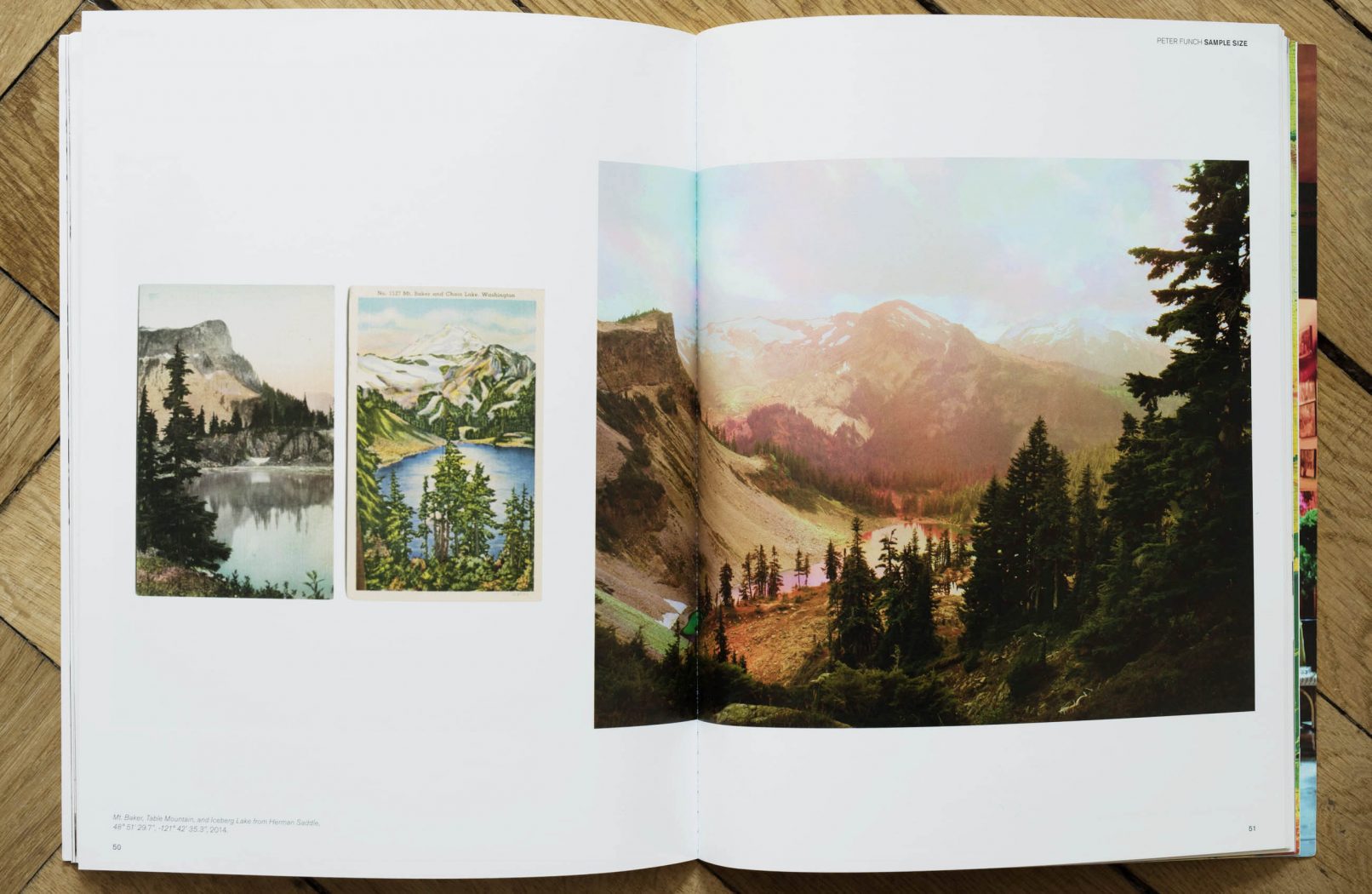 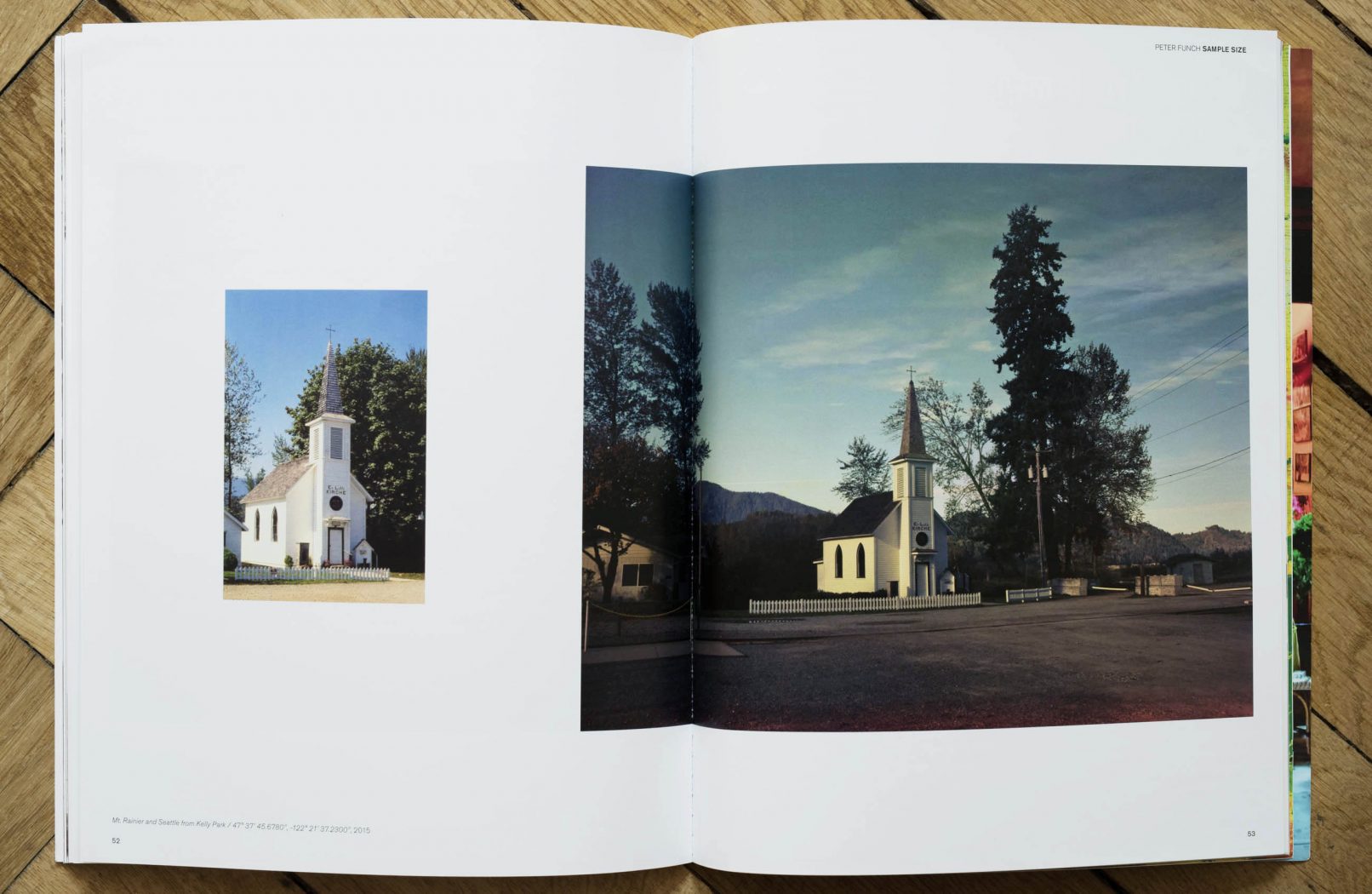 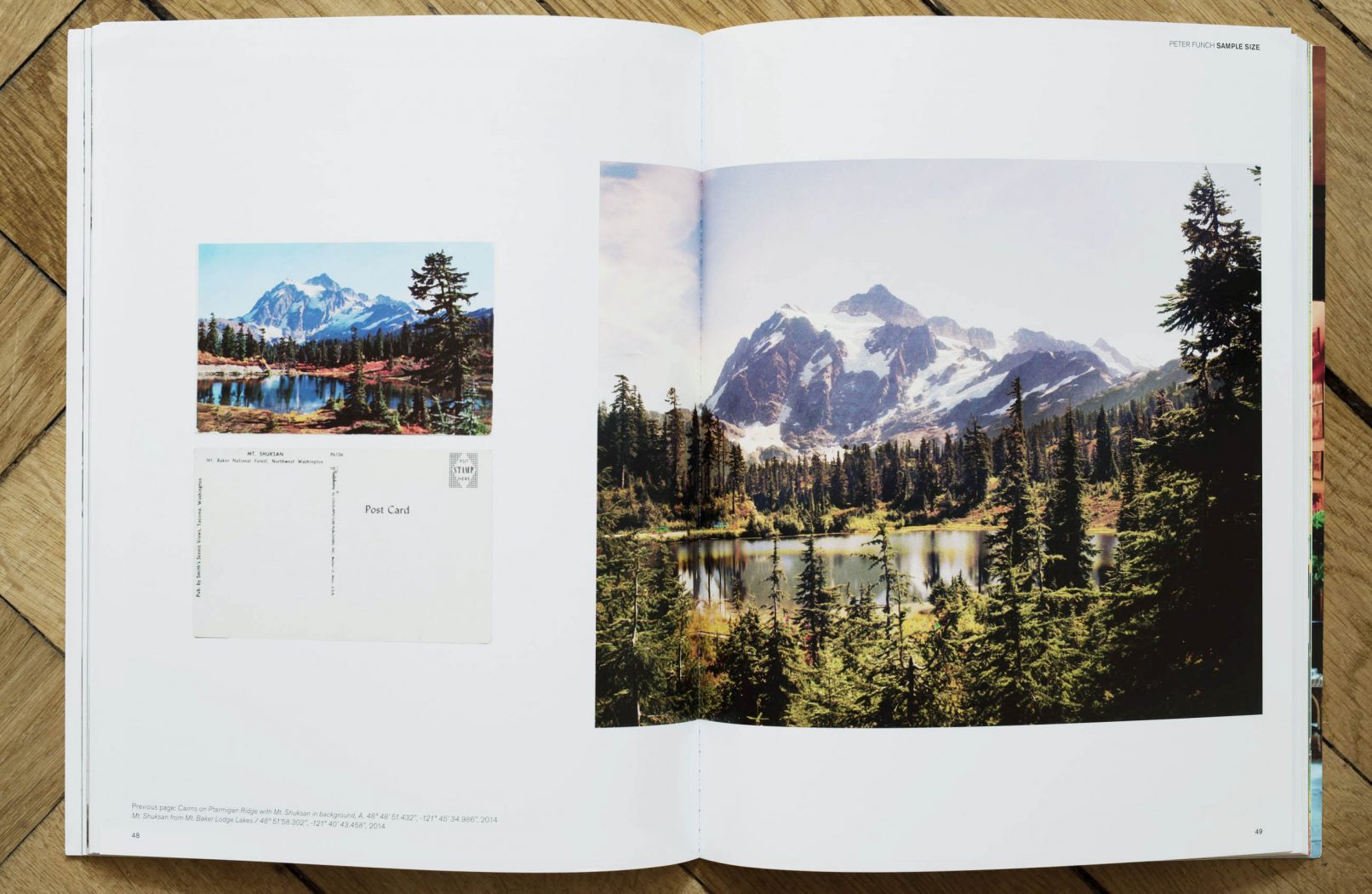